Prompt claiming is ongoing through 30 April at the

13 creators have claimed prompts at the

sshg_promptfest! It looks like we're in for an intimate fest of fic. *twirls*

Prompt claiming is ongoing through 30 March 30 April (which is the deadline for selecting a second prompt), so if you know anyone who'd be interested in playing with us, encourage them to join and watch the

sshg_promptfest and claim one of the 237 remaining art and fic prompts. :D

Have you questions about the fest's rules, schedule, and submission guidelines? Direct them to sshg.promptfest [at] gmail [dot] com! 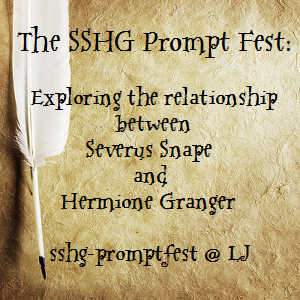 sshg-promptfest, cut and paste the code below into your journal.
Tags: community promotion, promotion, severus & hermione, severus/hermione, snermione, ss/hg, sshg, sshg_promptfest
Subscribe
Comments for this post were disabled by the author