sshg_promptfest is not a gift fest, remember? from the rules?

sshg_promptfest exists to inspire the creation of new SSHG-themed works and is designed to allow creators to take inspiration from prompts without having to be as mindful of others' expectations to the extent that they'd be in a gift fest. In a gift fest, it would be completely unacceptable for prompts not to be answered precisely as wished, or to be claimed by more than one creator (unless, of course, two people received permission to prepare one gift for the same recipient). In a prompt fest, however, that two people might take inspiration from a well-known book or movie, particularly when there is nothing in the rules to preclude them from doing so, is completely acceptable, even when they take inspiration from the same prompt. In some fests, such as

sshg_smut, for example, participants are even explicitly invited to claim the same prompt "once for art, once for fic": 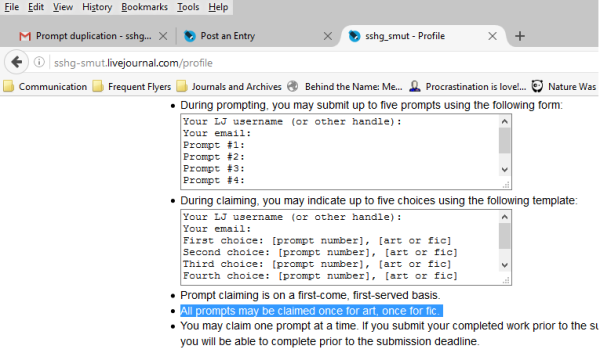 Now, the SSHG Prompt Fest isn't as explicit as is SSHG Smut, amongst others, in inviting its participants to take such dual inspiration, but again, there is nothing in the rules that precludes it. Why not? Well, we all know that similar inspirations tend to lead . . . everywhere. Snape lives!—thousands of times across multiple fannish platforms—and that's excellent because many of us are still a little canon shy with regard to his death even after all this time. It's comforting to see Hermione bring him back in as many ways as people can imagine her doing so, so as a mod, I'd never want the rules of my fest to step on anyone's creativity.

The upshot of this post is that, yes, authors may take inspiration from the same prompts artists use when prompting themselves for fic, and no, there is nothing at all wrong with it; it's not against the rules, it's not against fandom norms for prompt fests, it's not against the creative process, and it's not the same thing as someone hijaking someone else's already-claimed gift request. All that said, there are some people who would, because they don't understand the fest's rules and purpose, have you ignore the author of today's offering, The Prince's Bride (PG). I hope that you won't do that; MA worked hard on today's offering, and it takes nothing away from the previously posted artwork, The Princess of Gryffindor Bride (G); each work may have taken inspiration from The Princess Bride but is charming and funny in its own right.

Go judge for yourself! :D
Tags: fest promotion, fests and communities, sshg_promptfest
Subscribe
Comments for this post were disabled by the author