The dogs are enjoying some time together after eating cannoli: 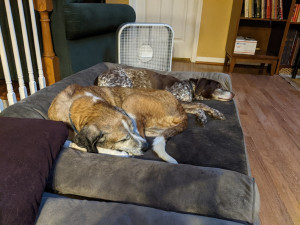 I scraped off the chocolate coating, so no worries there.

Under the cut, additional pics await.

Lastly for now, Merva bit me yesterday after getting spooked by Darcy's nearness on a walk. Things had been going so well, too, but now I'm on antibiotics and have a half-useful hand for a while. Pets are such a joy. *snorts*

Of the many things that happened over the weekend, one of the most concerning was that Darcy slid down the stairs after being called up them the second time she'd gone to explore the basement. Catboxes drew her, I imagine, as well as the fact that Albus goes down there to clean up the canned cat food after the cats come upstairs. In any case, Dar's legs gave out, and I had to bring her out the basement entrance and around the house to get her back on the main level.

She's all right, but obviously, she can't be left alone with the stairs. To protect her, we've moved the loveseat in front of them. It's not ideal, but until we find a gate, it's what we're doing. And it's keeping Albus off the stairs, which is a good idea as his joint issues make them dicey for him, as well.

The cats weren't initially pleased by the change, but now, they love camping out on the loveseat and daring the dogs to try and pass it without catching a (mostly playful) paw. *snorts*

In a "shocking" turn of events, Albus and Darcy enjoy toasted bagels with butter. ;P

And now it's naptime.

It didn't last long, but Albus and Darcy shared the dog bed again! 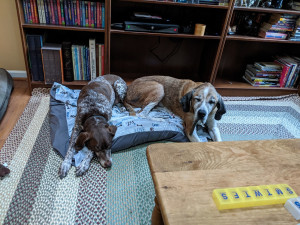 And after her bath, Darcy's really looking good! 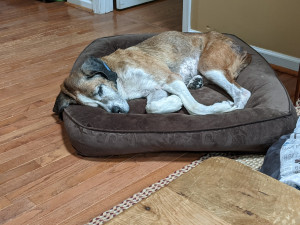 Not that it's all rosy—Albus the Dog doesn't really enjoy sharing his dog beds, his sofas, his anything, and that leads to some bristly, growly moments between them. Darcy doesn't actually really notice them, but Albus did try to take food from her, and she barked at him. Of course, it was Albus' food, so I fussed at her—but he had tried to take her food, so it was turn about. Baby steps.

(Oh, and the dogs have so many meds I've had to buy pill trays to sort them. ;P)

If you're available to pinch-hit for a

snapecase sign ups are closed, and I've just posted the 2022 List of Snape Showcase Creators! I can't wait to see our creators' contributions in January!

snapecase boasts some stellar, imaginative works in all its categories, but I invite you to review the works of Category One toward finding inspiration to tell new stories about Snape from birth to ten-years-old. Snape's early years as represented by this age range provide a great deal of artistic space for exploration.

snapecase sign ups continue! Currently, there is one open position in Category One.

Questions? Email them to snapecase [at] gmail [dot] com.

snapecase sign ups continue! Currently, there are open positions for the following categories:

Categories One and Three must be filled for the fest to run properly. Please sign up today! :D

Well, now I know why Dar's been trying to snuffle that particular spot in the woods—she just found the remains of a coyote. I think that also explains why our neighbors' big dogs have been slipping out of their yard so often of late (and why Dar refused to eat breakfast this morning).

Even I couldn't fail to smell the carcass this afternoon; it was rank! Darcy looked so pleased with me for stopping to examine it, as if I'd finally shown her I wasn't entirely devoid of basic survival skills. ;P She was grumpy that I wouldn't allow her any nibbles, but she'll get over that eventually. She did accept part of my lunch before eating some crunchy food, so that's good.

And now I'm taking the shovel out to bury the coyote before it proves too much temptation for any other neighborhood dogs—for that reason, and also because after today, I never want to experience that particular scent again!

I hope your day is going well!

snapecase boasts some stellar, imaginative works in all its categories, but I invite artists and writers to review the works of Categories One and Three toward finding inspiration to tell new stories about Snape from birth to ten-years-old and from twenty-one- to thirty-years-old. Snape's early years as represented by these age ranges provide a great deal of artistic space for creators to explore.

Questions? Email them to snapecase [at] gmail [dot] com.